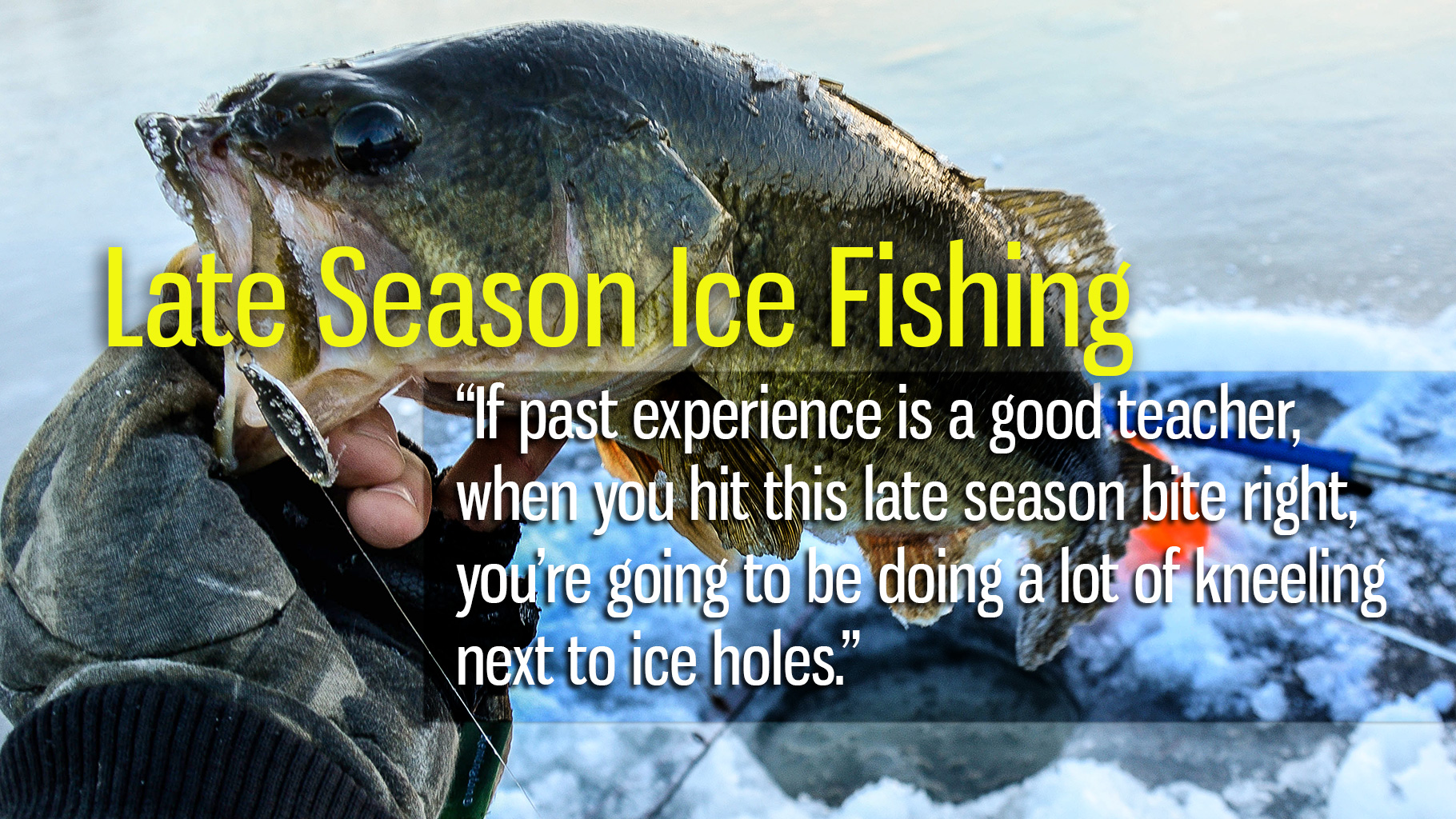 First, why should you get in on this late season ice-fishing action?  Probably the best reason is that the bite can be really, really good.

Next, the weather can be really, really nice for ice-fishing.  There are times when the wind is calm and the sun is shining and it’s a warm day. You’ll be out there in a long underwear top and a hooded sweatshirt, jeans and bibs:  That’s all you need to keep comfortable.

In several states in ice country, panfish will be the quarry.  Walleye and pike season closes to ice-fishing, but you can still catch perch, crappies, bluegills, and the like.

The fish will bite all day, but that early and late bite can still be the most productive.  Be out there all day if you can, but if you can only get away for a few hours, make sure some of those hours are when the light is lower than mid-day, especially if you’re on a clear water lake.  In stained bodies of water, light isn’t as critical, but it’s still a factor.

When the fish are as aggressive as they can be at this time of year, use an aggressive approach.  Keep moving to different holes until you find biters, and use an aggressive action on your bait, at least until the fish show up on your sonar.  If perch are what you’re after, start with a medium sized Buck-Shot Rattle Spoon or Forage Minnow and shake’em good to get their attention.  If they look but don’t eat, don’t shake it so much.

This is the time of year when I get a good workout on the ice.  I fish from a Frabill Thermal Commando one person portable.  It pulls easy and is very comfortable to fish from.  I put my auger, sonar, a couple of rods and reels, and some baits in it and just start moving.  I pop a line of holes along what I hope is a productive structure, then go back to the shelter and start fishing.  I spend a few minutes on each hole, then move to the next.  When I get to the last hole, I drill another line of holes and start over.  By the end of the day, I’ve usually covered a good sized area.

This is the time of year that you’ll appreciate a pair of bibs with waterproof knees.  Guidewear bibs are a great example.  You’ll find yourself kneeling next to the hole to land fish, and that area around the hole can get pretty sloppy.  The waterproof knees will keep you drier.

If past experience is a good teacher, when you hit this late season bite right, you’re going to be doing a lot of kneeling next to ice holes.  This action is coming soon.  Make sure the ice is safe.  If it is, get on it and catch some fish.