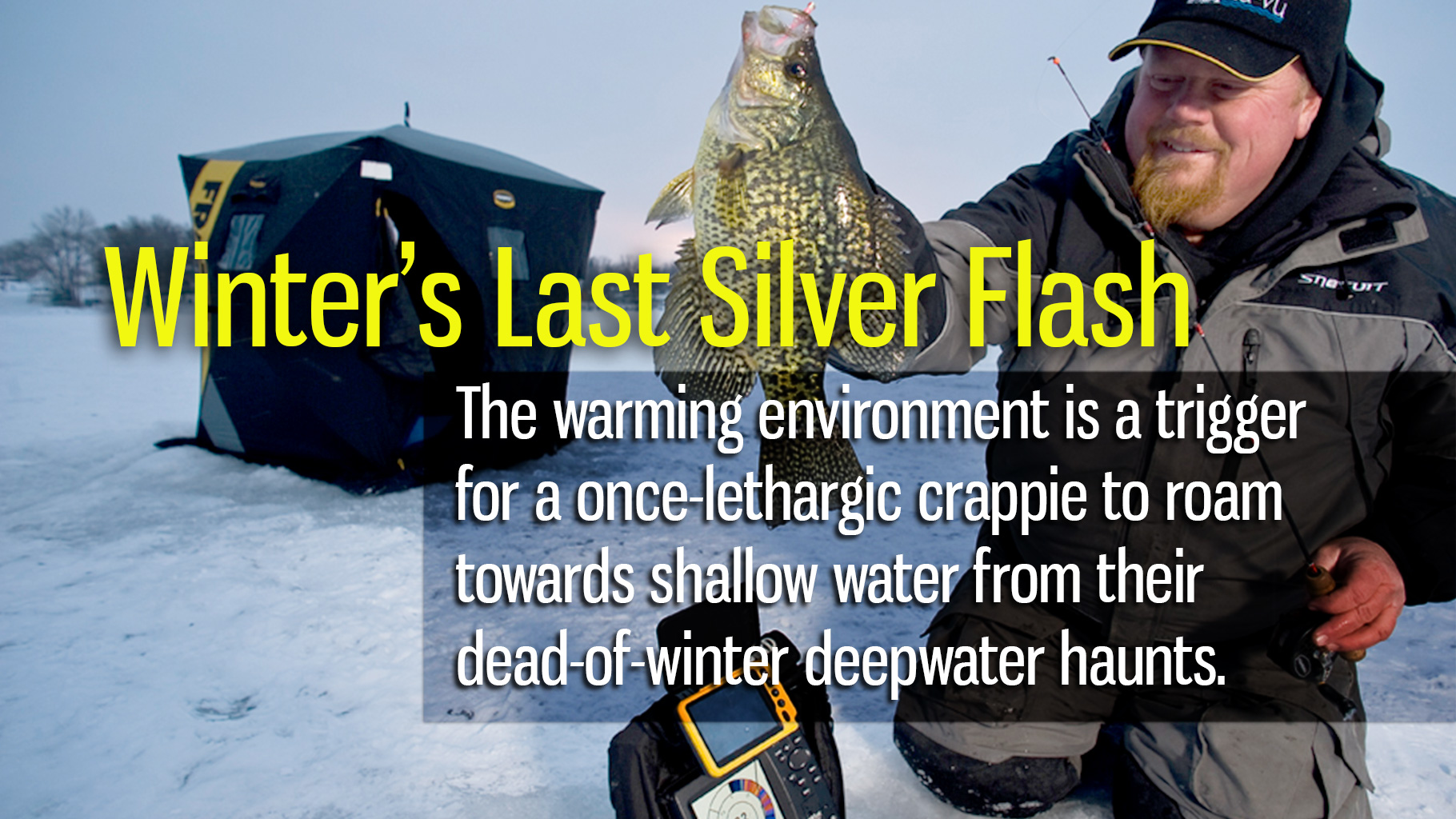 Winter’s grip will soon relax. As the season’s thick grey clouds thin, elevating rays of sun will slash through the bitter air and warm it to a more comfortable tone. The snowpack’s about to melt; the warming environment is a trigger for once-lethargic crappie to roam towards shallow water from their dead-of-winter deepwater haunts.

But a departure from the depths doesn’t always mean that fish head shoreward – they often go vertical. Unbeknownst to many is that crappies often elevate high in the water column to feast on tiny tidbits anywhere from only a few feet to mere inches under the decaying ice.

But while a few anglers catch limits of slabs before the ice gives way, others struggle to land any at all. The fish are feeding veraciously, so it’s not always about what to use, but more figuring out where to place your bait. And during late winter that might mean right beneath your feet.

By far, Tom Neustrom’s favorite time to target big crappies is last ice. To pinpoint right where to lower his offering in the water column, the respected guide relies on electronics, both sonar and an underwater camera. Neustrom has the luxury of living in one of North America’s crappie fishing hotbeds: Grand Rapids, Minnesota. So suffice to say he’s never short on technique testing waters.

“The moment I’m done drilling, I’ll drop the transducer into the hole and see right where the fish are, and then immediately drop down a tiny jig tipped with a squirming maggot into the strike zone,” he says. About 10 feet down over water 23 to 28 feet deep is where he sees the majority of crappies, spying them on his Humminbird ICE 597ci.

But there are times when fish spook easily from directly under a freshly bored hole, running them out of sonar range. That’s where an underwater camera comes into play.

Reaching into the pocket of his parka, Neustrom pulls out Aqua-Vu’s new AV Micro Plus with DVR – a color underwater camera no larger than a smartphone with the capabilities of recording what’s being seen on the screen with just a push of a button.

Rather than drilling a new hole and spooking the fish again, Neustrom drops a jig if he sees crappies off to the side. “More often than not, as long as I’m quiet, the crappies will either see or “feel” the presence of the jig through their lateral line, and will meander over to take a look. But give it time, as it may take several minutes for the water to calm down and the fish to feel safe enough to swim back,” he says.

Steve Knaisel runs “Pilgrim Village” – a popular tackle store situated between Lakes Cadillac and Mitchell in the town of Cadillac, MI.  Both lakes are loaded with crappie. A recent discovery about the location of panfish in these clear-water lakes at season’s end has Knaisel prepping the day before he even ventures out with rod in hand.

“It all started a few years ago, when my fishing buds and I were walking past a large hole left behind by a pike spearing angler – a hefty pine bow left in the hole to mark its location. As we went by, the surface erupted and water flew everywhere,” states Knaisel. “We had spooked a school of crappies at the surface, eating whatever it was that was flowing in with the melt water, or possibly other aquatic forage that rose to the opening.”

Dropping a line with a tiny teardrop jig tipped with a waxworm, the group of anglers proceeded to catch a limit of slivery-sided crappies from the enlarged hole, the jig never falling more than just a few inches under the lakes still-frozen surface before impact.

Nowadays, Knaisel punches a swath of holes through sometimes watery late ice with his Jiffy power auger. “The fish are literally so close to the surface that I’m sure their backs are rubbing up against the ice,” he claims. “So I like to make all my commotion the night before to not spook fish when I’m trying to catch ‘em in the morning.” Pre-drilling holes also allows the water to start siphoning, bringing food with it, well before he get there. “It’s kind of like chumming,” he asserts.

The food sources, you ask? All winter long, tiny insects have been piling up in the snows on the ice, as well the once live bait spilt by other angers and leftover pieces of their shanty snacks. The melting snow and ice flow into the holes and carry along the tidbits of food, and the crappies are right there awaiting them to flow by. “Sometimes the water’s draining so rapidly it swirls as if flowing down a sink’s drain,” claims Knaisel.

Reach out and touch someone

What’s the consensus of catching more crappies in this uber-shallow scenario? Most pros I ask suggest the longest rods available, so you can back from the hole and not disturb the fish.

Studying what’s offered on the market place, this outdoor writer’s found the perfect last ice lengthy rod, and that’s Frabill’s 54-inch Jiggler Long Rod Ultra-light (55 inches total counting the built in single-action reel) to be the perfect weapon. It was built with this type hole-hoping method in mind

Extremely light line (1- to 2-pound test) is best for deceiving panfish as it allows the most lifelike presentation to tiny jigs. The Jiggler rod was designed for such finesse, all the while protecting the line from damage by allowing the line to run through the blank, rather than through guides that can freeze up and fray.

If you’re hankering for a basket of pan-fried crappies before the ice goes bad, aim high – literally inches below your feet. Spy ‘em with electronics and lower your offering right to their face. Or for something different, drill a bunch of holes and let the draining begin.

In closing, as good as the late ice bite can be, safety comes first. No life is worth a limit of crappies. Listen to the voice in the back of your head that questions ice conditions; wear a lifejacket, even if you think it looks ridiculous; carry easily accessed, handheld ice spikes (Frabill offers an affordable Ice Safety Kit); never fish alone; and always be sure someone on.