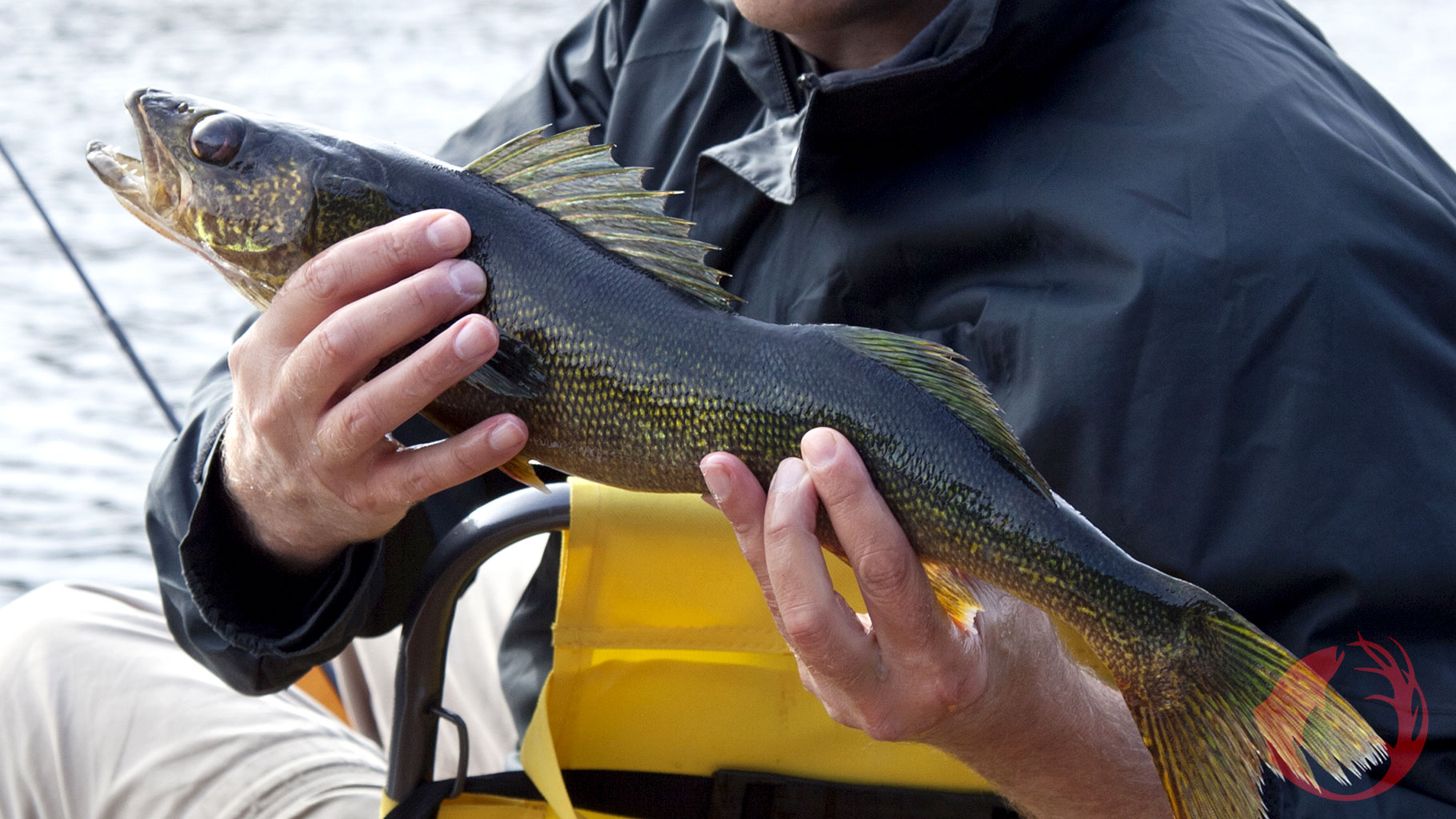 Walleyes are often thought of as a fish that inhabits the depths, and there are times when most of them will be found in deep water.  However, there are other times, more than you may think, when you can catch walleyes shallow.  Right now, and for much of the open water year, there will be times when walleyes are much shallower more often than we used to think.  Here are some ideas for taking walleyes in shallow water.

Our fishing friend Bruce DeShano took this walleye close to the surface.

Walleyes spawn in shallow water, water so shallow sometimes their dorsal fin will be above the surface of the water.  I think back many years ago when I was fishing the Wisconsin Walleye Opener.  We were on a very clear body of water.  Season opened at midnight, and I was in my boat at the dock about an hour before season opened.  I was rigging rods so I would be ready to fish at midnight.  I kept hearing splashing just a few yards down the shoreline.  I got my spotlight out and shined it to where I heard the splashing.  Just a few feet from shore in water less than 2 feet deep were several walleyes, and just a little farther down there were more.  When midnight arrived, I tried pretty much everything that I had in my tackle box, but the walleyes were more interested in spawning than eating.  However, later that day we found a bunch of walleyes that had spawned a few days earlier that were willing to eat a bait.

Walleyes will be shallow when they’re spawning, but they’ll also be shallow when shiners or other baitfish are spawning.  Shorelines with small rocks, areas with vegetation starting to come up, points related to shorelines, these areas will all hold shallow walleyes early in the summer, and there are lots of ways to catch’em when they’re in these locations.

Crankbaits, slip-bobber rigs, live bait rigs, they’ll all catch shallow walleyes.  But the folks who catch walleyes most regularly are probably throwing a jig tipped with either a minnow or plastic.

Soon after they spawn, walleyes will be very susceptible to a jig and minnow combination.  In some bodies of water the walleyes will eat a jig tipped with a fathead minnow:  In other bodies of water a shiner on the back of a jig will be far more productive.  I almost always have shiners and fatheads in the boat, and we’ll also probably have leeches and nightcrawlers just to make sure our bases are covered.

An eighth ounce stand-up Fire-Ball jig or a sixteenth ounce round head Fire-Ball are the go-to jig for many shallow water jiggers.  Both have their place.  When a slow dragging stop and go retrieve is the ticket, go with the stand-up design.

As the water warms, the walleyes become more susceptible to a jig/plastic presentation. Walleyes in cold water will eat a plastic bait, but I like to fish plastic pretty fast, and it seems like warmer water is best when it comes to walleyes and plastic bodies.  When you’re using plastic, use a jig of one color with plastic of another color.  Orange head/chartreuse body is a favorite.

I used to use monofilament line with jigs, but Tactical Fluorocarbon in 6 pound test has really gained favor with me.  It’s tougher, it‘s invisible, it’s sensitive, it’s good stuff.

Walleyes can be found in shallow water year ’round almost anywhere they live, but really expect them to be shallow now and into mid-June.  If you do, you’ll find yourself catching walleyes shallower than you might have imagined.