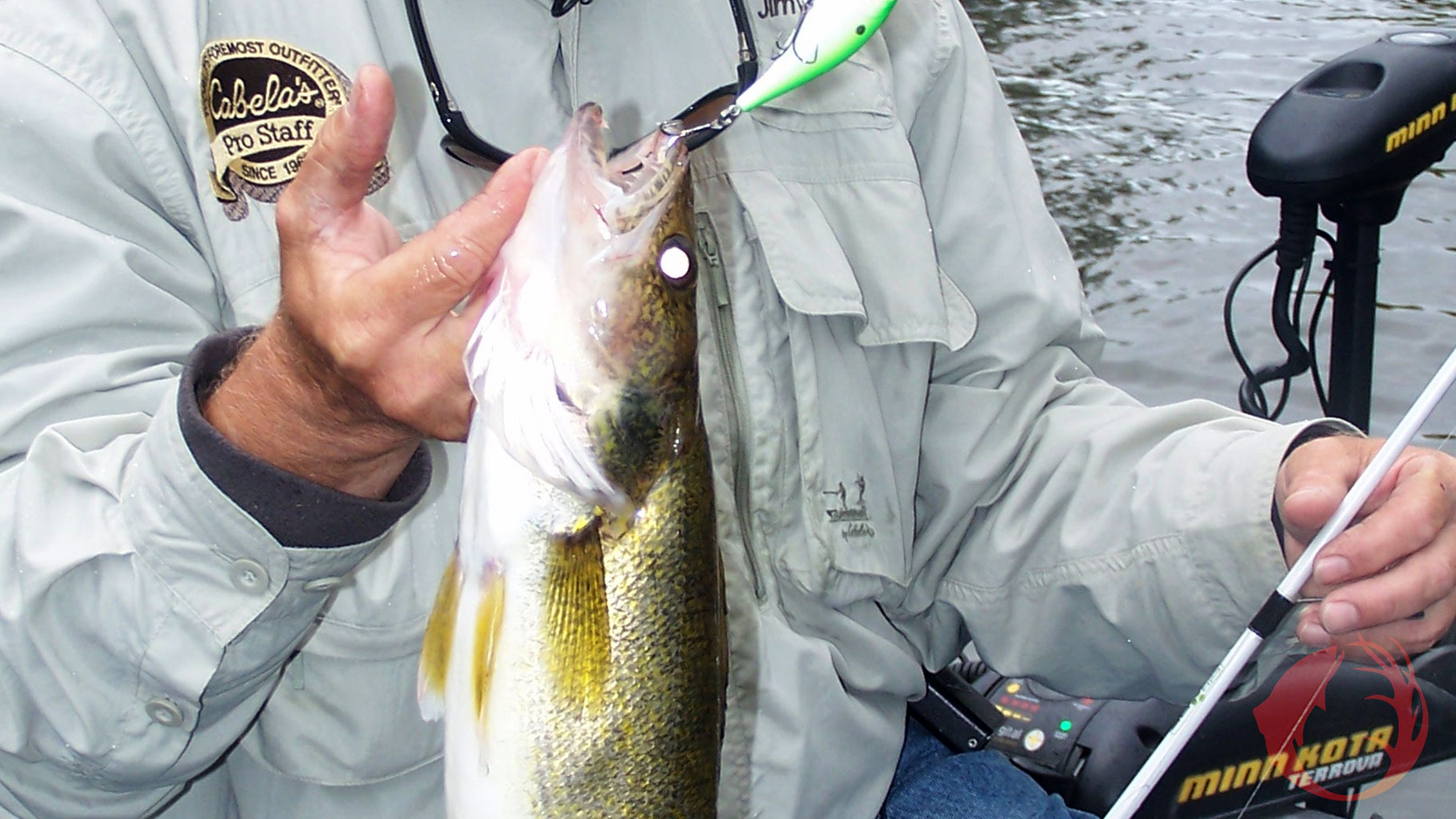 The weather has been really hot across the Midwest, and sometimes we equate hot weather with slower catching when we go fishing.  That doesn’t need to be the case.  Wherever you live in much of North America, there is a river close by, and the fish in that river are willing to eat, even during hot weather.  River fish are constantly dealing with current, so they expend more energy, so they need to eat more often. In the summer months, rivers can provide consistent fishing action.  Here’s how you can get those fish to eat your lure.

Lots of baits will catch river fish, but if you’re after bass, walleyes, pike, or panfish, it’s hard to beat a jig tipped with soft bait.  A Thumper Jig tipped with a 2 or 3 inch action tail can be outstanding.  The Thumper Jig has a spinner that will attract fish better in stained water, but regardless of water color, river fish like the Thumper.

Small crankbaits can also be very productive.  Tie on a Series 3 Strike King Pro Model.  You’ll usually do best with a bait that runs down to about 5 feet unless you’re trolling open water.  Color often isn’t important, but something with brown, orange, or red in it will be a good starting point.  Crawdads are an important food source in many rivers, and brown, red, and orange baits resemble crawdads. 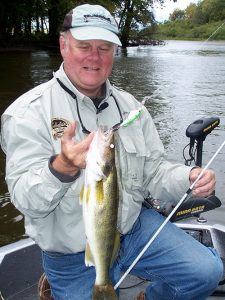 Our fishing buddy Jim Hunt with a Mississippi River walleye that he caught on a crankbait. Jim works at the Cabela’s store in Prairie du Chien Wisconsin and is an expert river angler.

Lure presentation is important.  Keep in mind that river fish that are interested in eating are usually facing upstream.  Fish that are facing downstream are usually going somewhere and maybe not so interested in eating.  Most of the time, not all the time, but most of the time, you’ll want to present your bait so it’s moving into the fishes face.  Usually it works well to cast cross-stream and retrieve the bait so it washes into the suspected fish-holding area.

Many rivers are best fished by wading.  Some anglers like to slip into waders and walk around in the river.  I’ve been wearing a pair of Cabela’s neoprene waders, they’re very similar to the current Classic Series II, for many years, and although it’s time to replace them, they’ve served me well.  If you’re one of those anglers that likes to get in the water, keep in mind that it is often most productive to start downstream and work upstream.  By doing so, you will be presenting your bait in a downstream manner, and you’ll be less likely to alert the fish to your presence.

Also if you’re wading, keep quiet and move slowly.  Try to keep a low profile.  If you’re on the top of the riverbank the fish can see you easily and will spook.  Additionally, be aware that your shadow will scare the fish.  As much as possible, stay at river level.

Rivers are everywhere, and they can provide an outstanding fishing experience throughout the hottest periods of the year.  Find a river near where you live and get on it or in it.  I’m guessing that if you do that once, you’ll do it again.