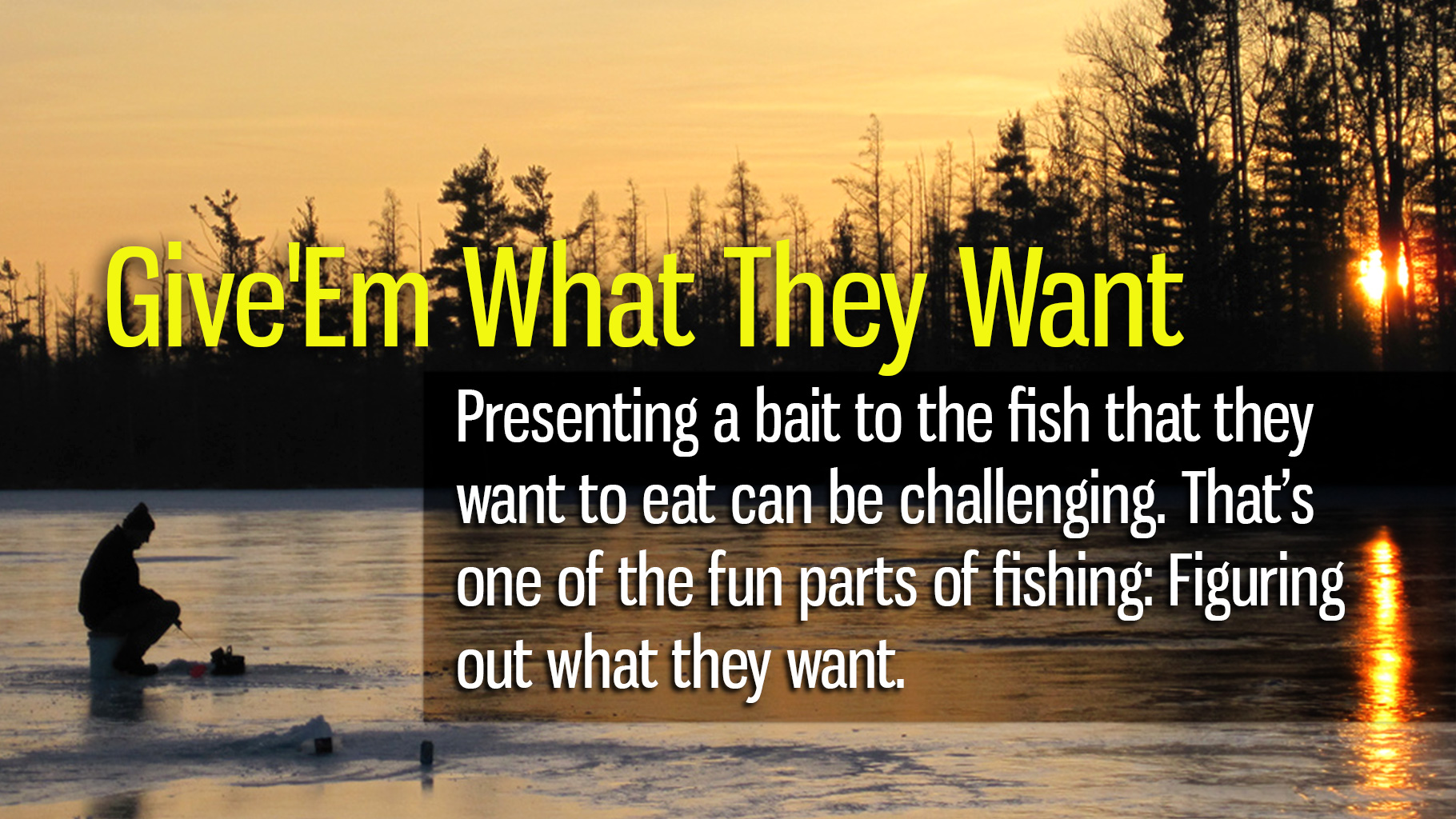 When you go ice-fishing, you need to do several things to consistently catch fish.

First, you’ve got to be on a body of water that has a good population of the fish that you want to catch.

Next, you need to be in an area on that body of water that is holding fish.  You many have heard the saying that “Ten percent of the water holds ninety percent of the fish”.  I’m not sure how accurate those percentages are, but realize that most of the water holds none or few fish.  You certainly have to be where there are concentrations of fish if you want increase your odds for success.

And then you have to present a bait to those fish:  You have to give’em what they want.  If you do all of these things, you will get bit.  At least you’ll usually get bit.

At other times, they can be incredibly finicky.  When they get finicky, you need to figure out what bait they want, what color, what size, and what action.  If you do this, you’ll catch some fish.  If you don’t, you’re going to be eating frozen pizza for supper.

Let’s say you put a bait down there and the fish eat it.  That’s a good thing!!  That’s what we’re after.

But let’s say you catch a few, then they keep coming and looking, but quit biting.  They may have become conditioned to the bait.  Try using the same bait in a different color.  Usually you’ll get a few more to eat.

But let’s say right from the start they don’t want to eat what you’re using.  They come in and look, but they don’t eat.  If they come in and just cruise by, you might be seeing fish that just aren’t biters right then.  They might start eating later in the day.

But if they come in and look, but don’t eat, that could mean that they can be tempted.  If you’re moving the bait aggressively, try slowing the action down.

A Buck-Shot Rattle Spoon is a tremendous walleye and perch bait.  But sometimes the rattles aren’t what the fish want.  If that appears to be the situation, go to a Forage Minnow spoon. It’s the same shape as the Buck-Shot, but it’s quiet, and sometimes that’s what will make the fish bite.

Try going to a smaller bait.  Sometimes finicky fish will eat a small bait but ignore a big bait.  The key here is, if what you’re doing isn’t working, then do something else.  Usually, if you keep trying different presentations, you’re going to eventually figure out what the fish want on that day.

And remember, just because they want a particular bait on this day, that doesn’t mean that’s what they’re going to eat the next day.  When it comes to fish, you’ve got to continually try different things to make them bite, or to make them bite better.  If you do that, you’ll be more successful more often.

What’s My Line For Ice – Fishing