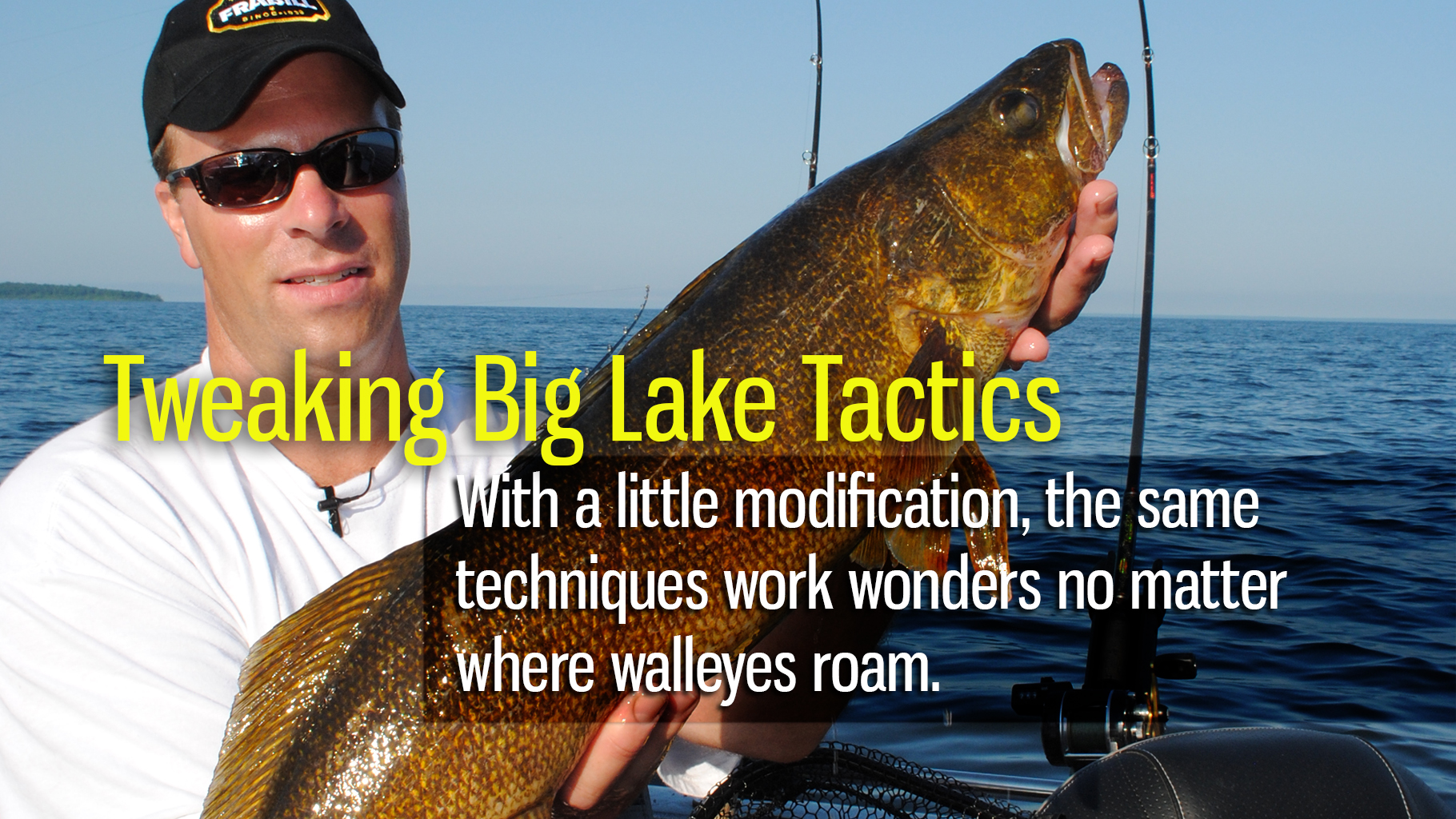 Walleyes are walleyes no matter where they wander. As a general rule, whether they reside in inland lakes, rivers, reservoirs or the Great Lakes, their year-round habits are shaped by two things: spawning and eating.

With that said, you’d think the same techniques would work the same wonders for conjuring up strikes regardless of where you fish.

Well, you know what? By and large, they do. But some big water tactics need a little tweaking to produce on you average sized natural lake.

Take the trolling ploys used to catch walleyes on the Great Lakes and huge reservoirs of the West; they’ll also work wonders on small inland lakes. The size and depth of the watercourse, however, may restrict you from setting up as many lines before beaching on the opposite shore, or, using the exact same lures and line, not snagging in the shallows with every trolling pass.

But it can be done. And oftentimes the tactics normally used on big water will out produce the tried and true ones generally associated with smaller lakes.

My own experiences with fine-tuning big water tactics for tiny water ‘eyes come from the small inland lakes of Michigan’s Upper Peninsula. For years the small water techniques of jigging, rigging and casting crankbaits were the tradition on the tannic-stained waterways surrounding basecamp. And we caught fish… well, most of the time. But I’ll admit there were times the fish were smaller and fewer than we’d like. And some years, honestly, they were nearly nonexistent.

But since being exposed to the modified big-water trolling tactics from two Lund walleye pros, I’ve modified the way I fish small waters. And once I started landing more and bigger fish than the others at camp, it didn’t take long for everyone to follow suit.

The first ploy I practiced just a few years back was trolling leadcore, which I learned from walleye wizard Mark Martin.

“Pulling leadcore in small lakes is probably the most overlooked method of them all,” says the Twin Lakes, Michigan, pro. “Perhaps it’s because the system is so easy to use, and anglers want to make things more difficult than they need to be.”

Literally pulling plugs right behind his Lund Pro-V, Martin lets out only 3 to 4 colors of ‘core (each color representing 10-feet of line) depending on how deep the water is and where he’s marking fish. To the tip of the lead-filled line he ties on a 6-foot leader of 10-pound-test monofilament.

“In smaller lakes I may only have time to let out two lines before running out of room, so I’ll have my partner deploying and fishing out one side of the boat while I do the same on the other. And we’ll just hang onto the rods rather than put them in a holder so we can immediately adjust the amount of line out if our lures hit bottom, or quickly reel in before starting another pass,” he adds.

Martin’s two best baits for trolling behind leadcore are #5 Rapala Shad Raps and spinners (aka: crawler harnesses) with plump night crawlers fresh from his Plano 745 Worm and Leech Box. When cranks are being pulled, Martin creeps along at 0.08 to 1.4 MPH, while he averages 1.2 to 2 MPH when trolling crankbaits. And he trolls one or the other on all rods, not a combination of both, because of the differences speed requirements.

The first time I tried this was after several hours of jigging the usual shallow water haunts without success.

One pass while scanning with my Humminbird sonar and I spied fish hovering about 10-feet off bottom in 35-feet of water. With three colors of leadcore out on an 8-foot St. Croix Eyecon trolling rod and Diawa line-counter reel with a crankbait in tow, it took only four passes through the short, few hundred yard area to scoop a two-man limit of walleyes.

It was a small water leadcore lesson learned.

There are still those days, however, when walleyes seem to disappear from sonar’s sight over main-lake basins. When this is the case, more than likely, the fish are ultra shallow and tucked tight to cover.

“When walleyes are in skinny water they’re usually hanging close to weeds, wood and rocks. And when the bite is off, it’s best to cover as much water as possible and get your offering in front of as many fish as possible,” says guru-of-getting-walleyes-to-strike, Mark Brumbaugh. “But trolling in shallow weed-infested waters can be frustrating… unless you break out the heavy line that is.”

“The water resistances due to the line’s broad diameter will keep the lure up and off the bottom, free from snags. And when tucked deep onto cover, walleyes will dart up and out for a quick strike, even when the lure is several feet over head,” he adds.

Only if the lure’s action is diminished because of the heavier, stiffer line will Brumbaugh add 2 feet of lighter 10-pound-test leader material, which he attaches via a small ball-bearing swivel. The swivel, too, acts as a “snare” if weeds are floating on the surface and catching and wrapping the line. If he’s fishing straight off the 20-pound test, Brumbaugh will pinch on a tiny split-shot about 2 feet above the lure to keep weeds off it.

Maximizing his bite, Brumbaugh employees Off Shore in-line planer boards to get as many lines extended from the path of his Lund and out to fish that haven’t been spooked.

It was literally just last year that I took Brumbaugh’s advice and spooled 20-pound to the reels on my St. Croix Eyecon rods and tickled the weed tops with crankbaits and spinners. The result was another upset bunch back at camp that didn’t know about this heavy-line trick.

Looking to land more walleyes from small inland lakes when tried and true tactics don’t seem to be working? Look no further than plying the depths with leadcore and crankbaits or spinners if you’re marking fish deep, or going heavier than normal in pound test to keep your lures up and out of the shallow weeds.