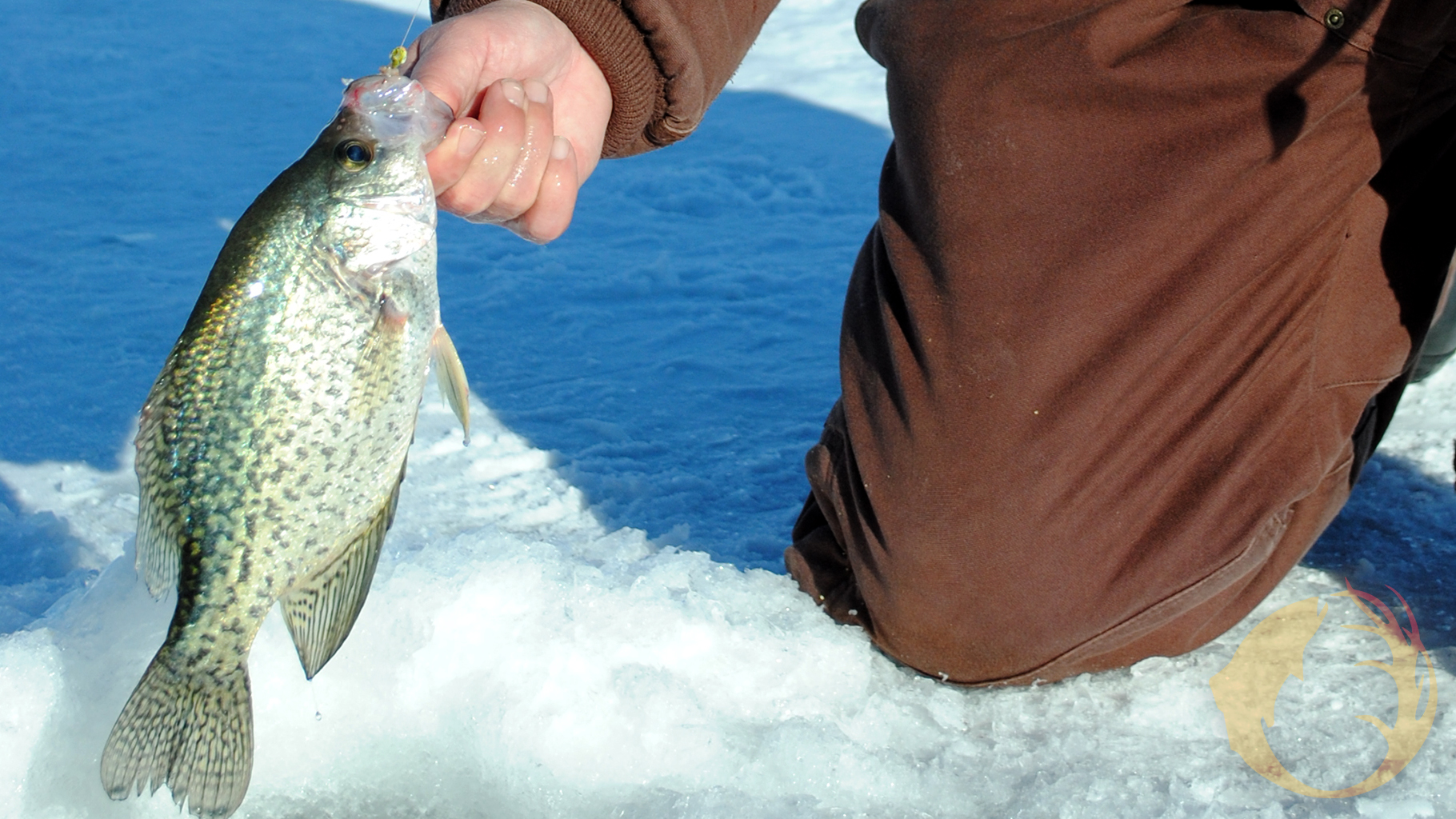 A South Dakota crappie taken while “trolling on the ice”. Keep moving for more fish through the ice.

I was introduced to trolling on ice by several very accomplished ice anglers back through the years. Lake Mille Lacs guide Tony Roach showed me how to troll for walleyes, John and Duane Peterson introduced me to trolling on ice for Upper Red Lake crappies before that, and Craig Brown and I trolled on ice for Lake Winnibigoshish perch.  These are all huge bodies of water, and much of that water is void of fish.  “Trolling” helped us find fish quickly, and it will do the same for you wherever you fish through the ice.  Trolling on the ice increases your odds of showing your bait to more fish, and the more fish that see your bait, the better your chance of getting bit.

Sonar and GPS/mapping will enable an angler to troll on the ice most effectively.  The GPS/mapping is very helpful, but the sonar is a must-have piece of equipment.  The GPS enables an angler to drill holes at the edges of drop-offs or up on top of a piece of structure, and that is so helpful and much faster.  But the sonar will reveal the depth also, and by drilling several holes and then employing the sonar, you can also learn about the structure down below.  Additionally and most importantly, the sonar will show if fish are down there.  Vexilar is the leader in sonar technology.  Once you use a Vexilar and learn how to interpret it, you will feel under-gunned and even out-gunned if you don’t have one.

Starting off, you find the area where you want to fish and drill holes.  Drill at different depths.  Now we start trolling.  The series of holes is considered the “trolling pass”.  Once you get your trolling pass set up, it’s just a matter of moving from hole to hole until you find a hot hole.  Put the transducer for your sonar in the hole, drop a bait to the bottom, and watch for fish life.  If you don’t see something within five minutes, reel up and “troll” to the next hole.

A jigging spoon such as a Buck-Shot Rattle spoon is outstanding for trolling on the ice.  You can fish them quickly to determine if fish are in the area.  Try different presentations until the fish tell you what they want.

Most anglers, when trolling on the ice, like a one-person portable shelter for their “boat”.  When ice-trolling, if there are 2 anglers, it works best if they fish separately.  That enables them to cover more water.  The Pro Cottage from Otter is a lightweight portable that pulls easily and is comfortable to fish from.  And, it has plenty of room for all the equipment that you will need.

If you want to catch more fish this winter, try trolling on ice.  Once you do, you’ll see why this approach is so effective.

How To Tune Your Goose Call