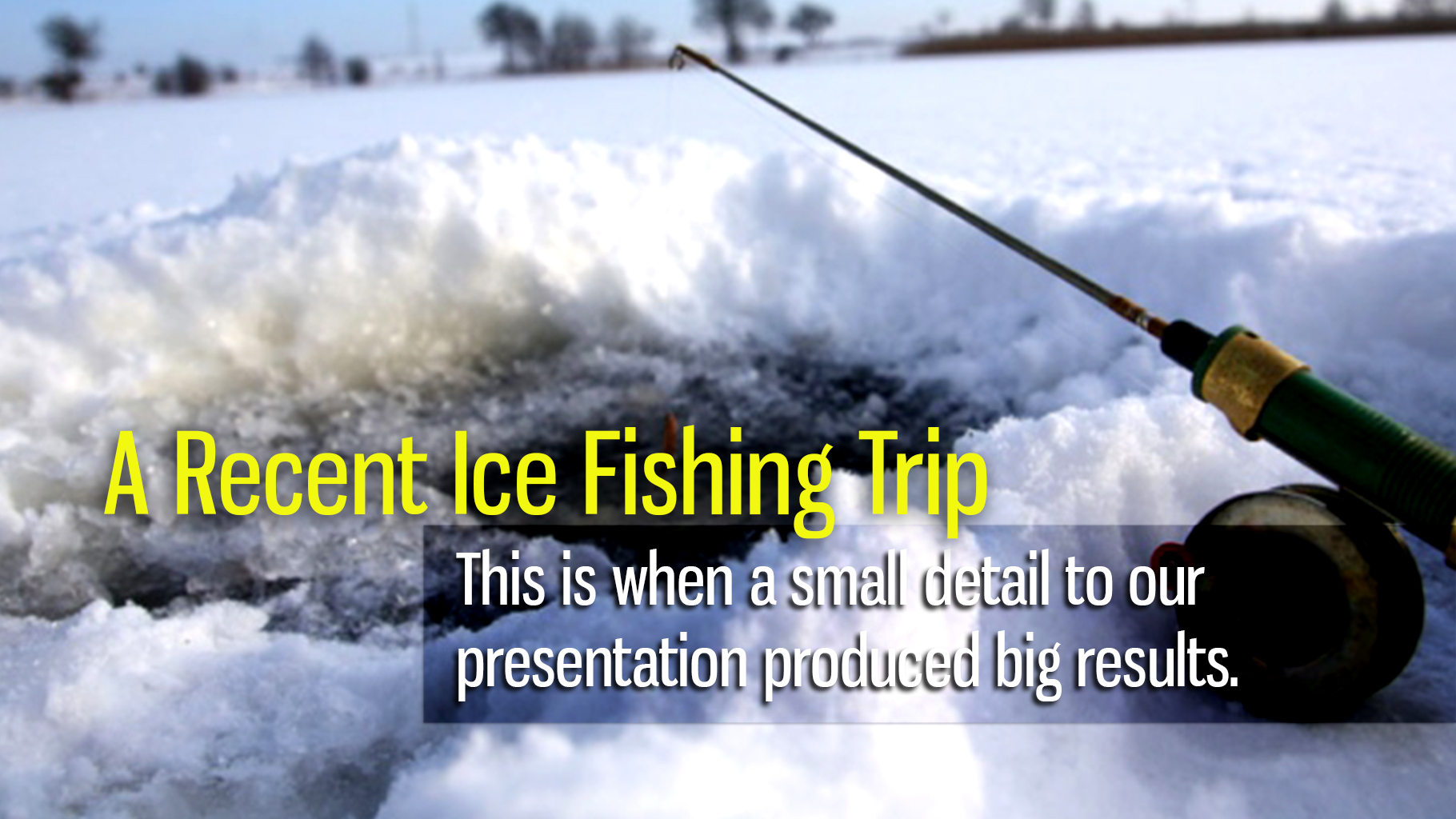 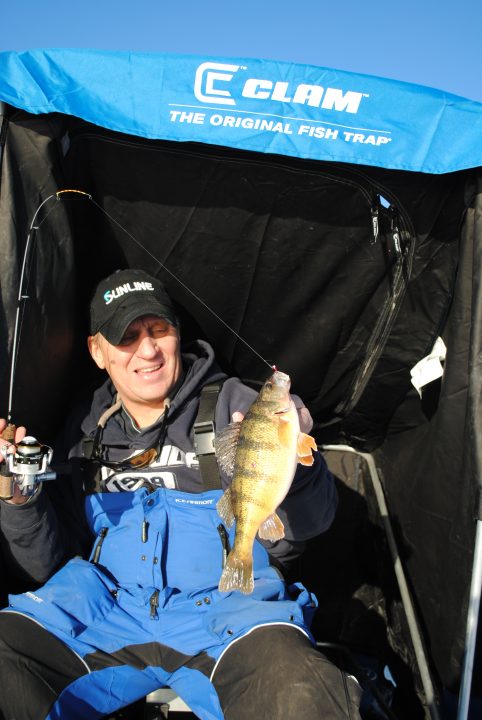 There are times when big perch prefer tiny baits. Mike Frisch caught this guy on a tiny tungsten jig.

I just got back from an ice-fishing trip to Big Stone Lake.  Big Stone straddles the Minnesota/South Dakota border and is an outstanding fishery for a variety of fish species, but it’s the perch that brought us to Big Stone on this trip.  Big Stone has become one of the Midwest’s premier perch fisheries.  There are lots of perch, and there are big perch.  And much of the time they like to get caught.  But just like anywhere, there are times that some “tweaks” to our presentation will enable us to catch more perch.  Following are a couple of “tweaks” that helped us catch more perch on our recent trip to Big Stone Lake.

We got on the ice about 8:00 a.m.  We had an idea where the fish were, but we still needed to pinpoint their location.  We had an Ice Castle hooked on behind the truck, but we also had portable Clam shelters.  The plan was to pop some holes in the ice and fish out of the portables until we found the area the perch were using.  Once we found the perch, the plan was to set the Ice Castle in that area and fish from it.

I was using a Vexilar FL-12 depthfinder.  This is a pretty basic unit, but it does an outstanding job of revealing what’s going on below the ice.  I could see my bait as it fell to the bottom, and I could see perch waiting for it.  What works well is to stop your bait a couple of feet above the fish and see if they’ll come up to it.  Early in the day they did.  If you catch the aggressive ones first, the aggressive ones are the perch that will come up for your bait, the rest of the perch will stay more active and you’ll catch more of them.

We caught a good number of perch in the first couple of hours.  Then, as the day continued, they got a little finicky.  This is when a small detail to our presentation produced big results.

Finicky perch often prefer smaller baits.  In fact, that’s true with most fish.  But smaller baits can be more difficult to use because they’re harder to feel.  This is where tungsten baits come into play.  Tungsten is denser than lead, which is what most jigs are made of.  Since tungsten is denser, a tungsten jig weighs more than a lead jig of a similar size.  Therefore, you can effectively fish a tungsten jig that appears smaller than a lead jig of the same weight, and in many situations, including our day on Big Stone, which was a big deal.  Tungsten jigs far out-produced lead jigs.  We used Northland’s Mooska and Banana Bug Jigs, both tungsten jigs, with lots of success.  We added several spikes to the jig to add scent and taste and wiggle.  It seemed like the more spikes we used, the more perch we caught.

Jig color wasn’t much of a factor:  The key was to use a small bait.

Wherever you fish, whenever you fish, if you pay attention to the small details, you’ll catch more fish.  That was certainly true on our recent trip to Big Stone Lake, and I know it will be true in future trips as well.

To see the newest episodes of Fishing the Midwest television go to fishingthemidwest.com, If you do Facebook, please give us a look for current fishing stuff.

Fishing Gear for the Winter Cold