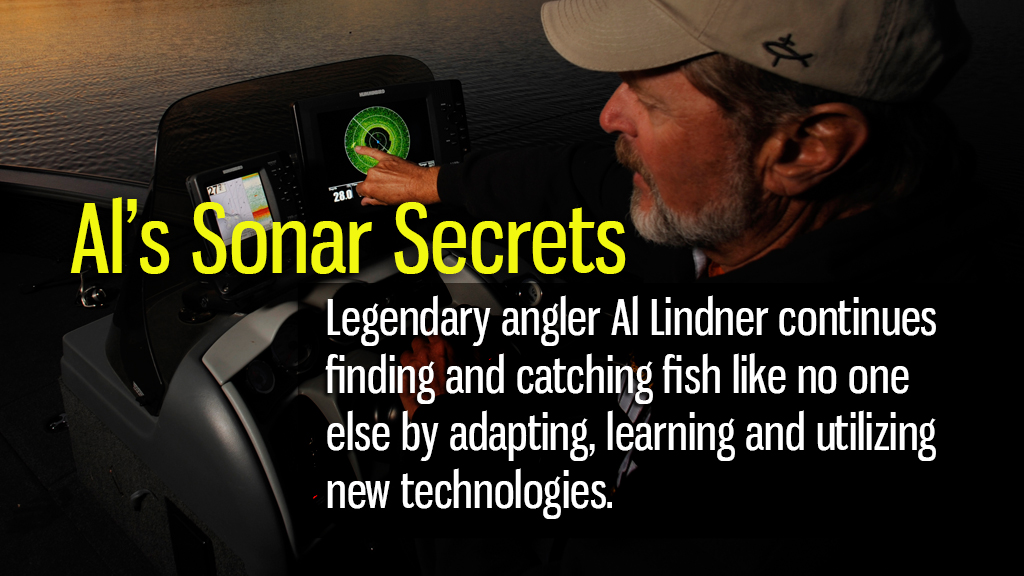 For over 50 years Al and Ron Lindner have been helping anglers locate and catch fish. From the seminal “Secret Teachings” formula of F + L + P = Success to FRS (Fish Response System), decades of info-packed TV and radio fishing programming, countless DVDs, to Lindner Media’s “Angling Edge” TV series, Al and family have dedicated their careers to the lifelong pursuit of fishing knowledge. Anglers agree, they’re the proverbial “gentlemen and scholars.”

Besides making fisheries biology accessible to your average angler, Al and Ron are also responsible for teaching anglers how to utilize technology to up catch percentages. From the first portable flasher units to paper graphs, LCD graphs, GPS, Side Imaging, Down Imaging and now 360 Imaging, Al says he still gets excited when the technological paradigm shifts and presents brand new ways of locating and catching fish.

“I’ve always tuned into technology. Anything that helps me understand more about what’s going on underwater is a good thing. I try to embrace whatever is going to help me do that. In fishing—like life—you never stop learning,” says Lindner.

Al Lindner says he relies on LakeMaster digital charts in his Humminbird units to find summer walleyes, among other fish species, depending on the day.

“You can set a Depth Highlight, which is the most important factor for me. Key in on the initial breakline the fish are using on the first drop-off edge, whether it’s weedline or just a natural breakline that rolls into deeper water, and you can stay spot-on all the time,” says Lindner.

This means he can quickly glance at his Humminbird screen and look for the area that he’s highlighted in green, positioning his boat to fan-cast over the funnel areas.

“In particular, it’s been a huge asset for fishing weedbeds where I want to lean in at certain points from deeper water and find funnel areas that hold fish, whether it’s walleyes, bass or muskies,” says Lindner.

For example, if the weed edge is in 15 feet of water, Al will set his Depth Highlight at 13 feet and key in plus or minus two feet to reveal areas of 11 to 15 feet where the bottom flattens out, forming a funnel going up on to the flat.

“When you’re fishing shallow-water breaklines, fish will penetrate farther up into these funnel areas than you might expect. What you find is a living space that is much more extensive than the sharp breaks on the weedline. You’ll find groups of fish, not just a single here and there,” says Lindner.

He continues: “It’s astounding how many walleye fishermen avoid shallow water. They get into 12 feet or shallower and start touching weeds and they get nervous and immediately go back down. It’s mind-boggling to see guys pulling rigs, boards and vertical jigging the breakline and deeper when the walleyes are in the weeds.”

He says he used to spend hours studying paper maps to locate these kinds of spots.

“With the LakeMaster map on my Humminbird it’s the press of a button and those locations are there. Plus, now I can scan the screen for the other similar funnel habitat throughout the entire lake. It’s simple, they show up in green for go,” says Al.

Al Lindner points to a walleye revealed by Humminbird 360 Imaging.

Unlike traditional sonar that generates views of what’s immediately under the boat, Side Imaging allows anglers to see off both sides, revealing lake structure, cover and changes in depth and bottom composition.

“If you don’t have Side Imaging on your boat, you’re fishing blind. All the good fishermen I know are using it constantly to find any fish that swims, shallow or deep. Whenever I’m on the water I have it turned on. It’s completely changed the way we fish,” says Lindner.

Lindner says Humminbird Side Imaging has allowed him to tap into a virtually unexploited walleye bite that most walleye anglers miss because they’re stuck in the mindset that you have to fish deep and stay vertical.

“A sizeable walleye population can be found from that first breakline and shallower on eight to ten foot flats. Earlier in the year they’ll roam these flats eating post-spawn perch and then as the weeds start to form they’re chasing the rush of spottail shiners. Truth is, a lot of these walleyes never move deep,” says Lindner.

He says these are the same fish people catch at night while trolling Rapalas but can’t seem to catch during the day. Although many anglers believe these fish slide off into deeper water by day, they’re still there, just spooky, especially on clear water lakes.

“Here’s the key. Use Side Imaging to scan for little dips on the flats. Let’s say it’s an eight-foot flat. Chances are somewhere up on that flat it’ll roll into nine-and-one-half feet like a little depression. You get sediment and little tufts of weeds in these dips that draw in the minnows to feed, and in turn, walleyes,” says Lindner.

Side Imaging reveals these depth gradients in variations of light and dark, depending on the color palette you choose. So, by scanning for these shading variations you’ll begin to notice what appears like little ditches.

“Rocks show up clear as day on Side Imaging. On shallow water flats it could be a small band that’s no more than 15- or 20-feet wide. These are the kinds of spots on the spots that consistently hold fish and are overlooked because everybody’s sitting on the first breakline and on down, not up,” says Lindner.

Once located, your Side Imaging scale will tell you exactly the distance off the right or left side of the boat where the structure’s located. Then it’s simply a matter of lining up your casts from as far away as possible to avoid spooking the fish.

“Jigs are my go-to confidence bait. I don’t know of anything that works better. Guys will troll over those fish with rigs and cranks and spook ‘em. You’ll catch far more fish by making long casts to them, even in high winds. It’s just that simple,” says Lindner.

“For open-water walleyes—especially those high in the water column—360 Imaging helps eliminate a lot of water. It can put anglers on big roaming pods of bait and the walleyes feeding on them a lot quicker,” says Lindner.

With 360, anglers can see the real-time movements of suspended walleyes while the boat is stationary, which is not possible with Side Imaging. This opens up possibilities for “power corking” with slip bobbers or casting cranks and swimbaits to walleyes moving off points or sunken islands into surrounding open water.

“Even sitting still, with 360 you can see fish, bait and objects; plus, you know the distance to the cover on the structure and the fish. That’s huge that I can go right to the target,” says Lindner.

But Al says 360 has a learning curve, just like Side Imaging did for anglers when it first hit the scene.

“Although the menu is simple, it’s not a flick of the switch kind of thing. Depending on hard or soft cover, certain color palettes work best, so you do need to play with that. Go where you know the water and the bottom and start playing with it,” he states.

Last year Lindner split his learning time with the technology between the natural lakes of the Brainerd, Minnesota, area and Arizona’s Lake Havasu.

“I can now pull into a cove on Lake Havasu and know exactly what kind of natural or manmade cover is there and if there are fish on it; 360 has allowed me to learn the habitat incredibly quick,” says Lindner.

Taken yet another step into the future, Minn Kota’s new iPilot Link allows your Humminbird units and LakeMaster mapping to communicate with the trolling motor, allowing anglers to “follow the contour” for super-accurate trolling and casting.

“Especially if you’re a walleye fisherman, it’s the only way to go. With iPilot Link you can dial in your contour off the LakeMaster map and set up an auto-steered trolling route or program Spot Lock locations. Or you might find five bunches of emerging cabbage on a shallow flat. Simply plug them in as Spot Lock locations, connect the dots, and press go to run your milk route,” says Lindner.

But the technology isn’t limited to walleye fishermen. You can also set a zero contour to follow the shoreline for pitching docks or emergent structure until you either run out lakeshore or battery, whichever comes first.

“When you marry everything together, LakeMaster, Humminbird, Minn Kota, I can’t imagine fishing without it now. All I can say is it’s just incredible,” says Lindner.

All photos by Bill Lindner Photography