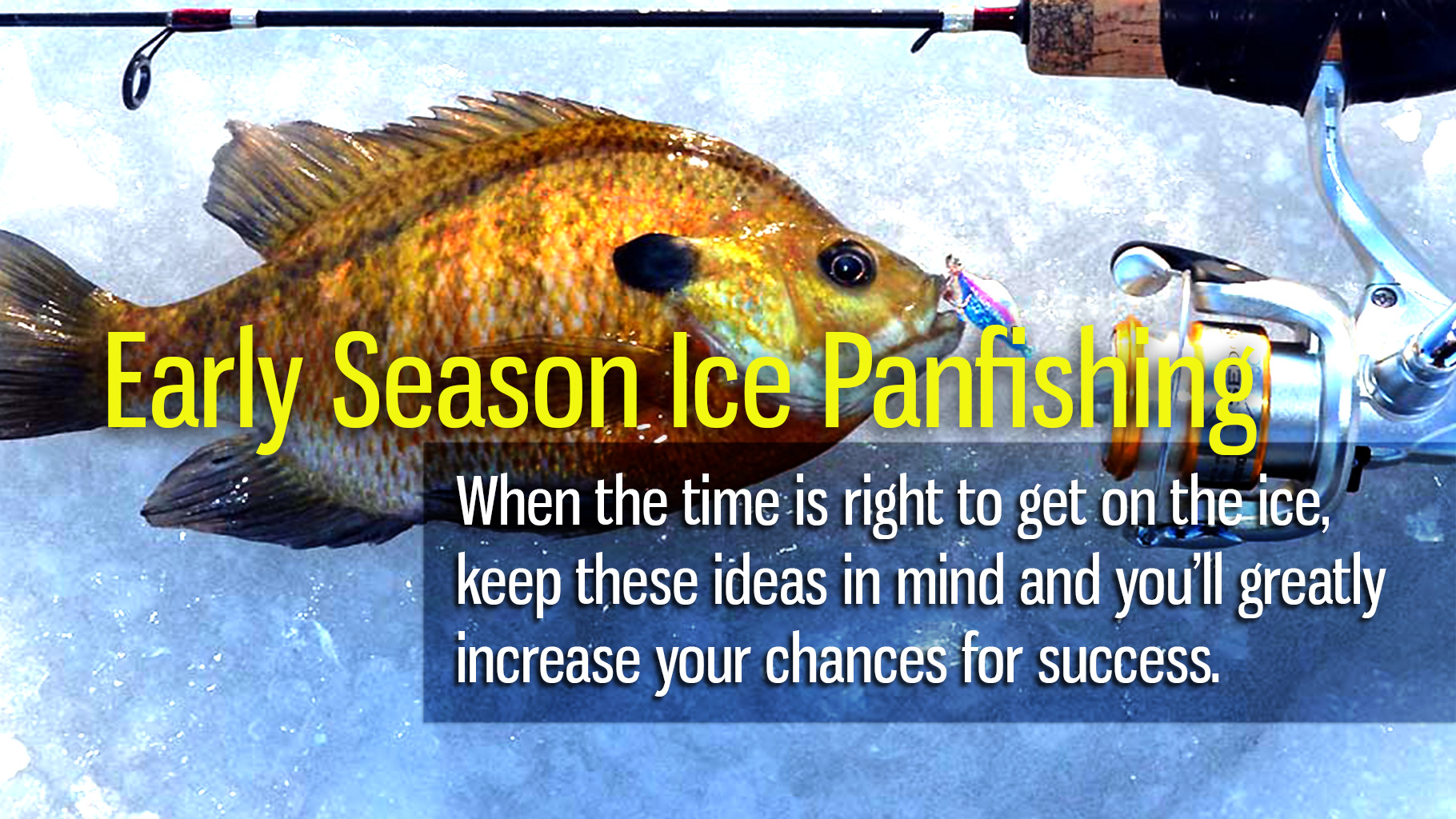 There’s been a skim of ice on the small ponds lately in the northern part of the region where people go ice-fishing.  That skim is gone by late morning, but it’s a reminder that ice-fishing is getting closer every day.  Although the more we learn about ice-fishing the more we realize that action can be good all season, the reality is that lots of anglers are really excited about getting on the ice as soon as possible.  If you’re one of those folks, here are some ideas for catching panfish through early ice.

First thing:  Make really sure the ice is safe.  You don’t need to be the first one out there.  If there are other people on the ice, and if they’re bigger than you, the ice should be safe for you.  However, it’s not a bad idea to wear a life-jacket on early ice.  Pop plenty of test holes as you walk to your fishing area.

Start ice-fishing for panfish in areas where you caught them in the fall.  Weedbeds can be very good.

Get on your starting spot early.  Remember, we’re fishing just a short distance from the fish.  They’re straight under us, and they’re going to be spooky.  Drill a few holes, then let the area calm down a bit.  Oftentimes it will take a little while before  fish in shallow water will start biting after you’ve popped some holes.

Once you’re set up, don’t move any more than you need to.  Even if you’re quiet, the fish will detect movement and get spooked again.

Panfish such as bluegills and sunfish like smaller baits because they have small mouths.

Crappies will go for bigger baits, as they have larger mouths.  If there are crappies, bluegills, and sunfish in the area, go with a smaller bait.  You’ll increase your chances of getting bit, as the crappies will eat the smaller stuff, but bluegills and sunfish often aren’t real interested in larger baits.

Tiny baits that hang horizontally in the water are favored by many accomplished ice-anglers.  Bro’s Bloodworm and Slug Bug are good examples of baits that sit horizontal and really fool fish.

More and more, ice-anglers are going to plastic baits, for two reasons.  First of all, they don’t require care.

Second, they really catch fish.  The new Impulse plastics come in tiny sizes for ice-fishing and are available in a bunch of shapes and colors.

Last thing:  Spooky panfish often like very little movement in the bait.  Jigs that are spinning under the water due to line twist are often ignored.  Frabill’s new Straight Line reels eliminate line twist and lures spinning.  In this case, the rod really can make a difference in how many fish you catch.

When the time is right for you to get on the ice, keep these ideas in mind and you’ll greatly increase your chances for success on early ice panfish.