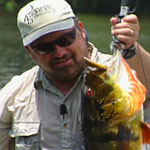 You might say that Mark Tobin was born to be a Pro-Staff member of The American Outdoorsman®. After all, he was born to parents who spent their honeymoon hunting for quail. Mark was only six weeks old when he experienced his first camping trip – the first of many hunting and fishing adventures he would share with his family. He was baiting his mother’s hook when he was too small to hold a pole, and at age 9, he bagged his first goose with a .410 shotgun. No small feat for any hunter. Mark’s progression to television was just as natural since his father Pro-Staff membered the Let’s Get Outdoors show that aired in the Kansas City market for nearly 20 years. “My father was my hero. I knew early on I wanted to follow in his footsteps,” he remembers. Mark’s television debut came during 1976 when he wrote and starred in his father’s show for a high school project. As The American Outdoorsman®’s top angler, Mark shares a lifetime of fishing experiences, including more than 10 years of tournament fishing. Tournament fishing has taught Mark how to be successful in all sorts of fishing conditions-techniques he’s quick to share with The American Outdoorsman® viewers across the nation. More important to Mark than just catching fish is educating viewers and showing the fun and excitement the sport has to offer. And all you have to do is watch Mark reel one in to see that he truly loves the sport and sharing his enthusiasm with viewers. You would think getting to hunt and fish in some of the continent’s most scenic and productive spots would be the favorite aspects of his job as The American Outdoorsman® co-Pro-Staff member. But for Mark, the favorite part of the job is the many opportunities it has given him to work with a wide variety of youth groups to instill the same sense of excitement and adventure he gained as a youngster. According to Mark, “My job isn’t to create just a television show. It’s to create memories. A show lasts 30 minutes….the memories should last a lifetime.”