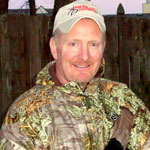 Lee was born into a military family and traveled around the United States and Europe for many years. When he was a youngster, Lee was always hunting and fishing. It all started with a fly-tying class in grade school and continued throughout his school years. He loved to deer hunt with a bow (a Warthog Recurve that he bought at a garage sale), and he hunted everything with that bow, including rabbits, squirrels, and deer. After High School, Lee joined the Army and became an Airborne Ranger where he continued to hone his hunting skills. He earned a degree in Wildlife and Forestry while serving in the military, and when stationed in Germany, he hunted wild boar and fly fished for trout. He learned to hunt whitetail deer as a kid and polished his skills by hunting all over the United States. He has extensive experience in bird hunting, from duck to Upland birds, but he loves to hunt wild hogs and predators most of all. He constantly seeks to expand his hunting knowledge by learning new techniques and is a man who simply loves the outdoors In his very limited spare time, Lee tries to find ways to make the great sport of hunting affordable for the not so fortunate hunter. For example, he made a homemade deer cain that is very cost effective and affordable for all hunters. He has also developed a method to zero a bow up to 60 yards in a 20-yard space, such as a backyard. Lee spends most of his free time in the woods scouting, placing trail cameras, and finding new ways to help his fellow hunters be successful. He shares his knowledge and experience with new hunters, teaching them hunting techniques, and then guides them on their first outing. Lee states that nothing can compete with, or be more satisfying than to watch a new hunter fill with excitement when a hunt is successful. When he is not scouting, hunting, or fishing, Lee has his bow in hand at 3D Archery Tournaments around the State of Missouri. He has won many of these tournaments with his favorite bow. He has taught his son to hunt and his son is an accomplished deer hunter with several big bucks under his belt. His son has also won 3d Bow tournaments using his Martin long bow. Overall, Lee is an expert marksman with a rifle and a bow. He is a true outdoorsman who has spent his entire life in the woods, in the mountains, on the water, and in the swamps, perfecting his knowledge of the hunting ground. Whether it is from a tree stand or a ground blind, he simply gets enjoyment out of seeing the wild game. Many times it’s just being around the animals in their natural habitat that is enough satisfaction for him. Lee resides in Liberty Missouri with his family who is his home base support when he is gone to the woods. His home base support is headed by his wife Traci who keeps Lee focused on his passions of hunting, bow shooting, and long range rifle shooting.