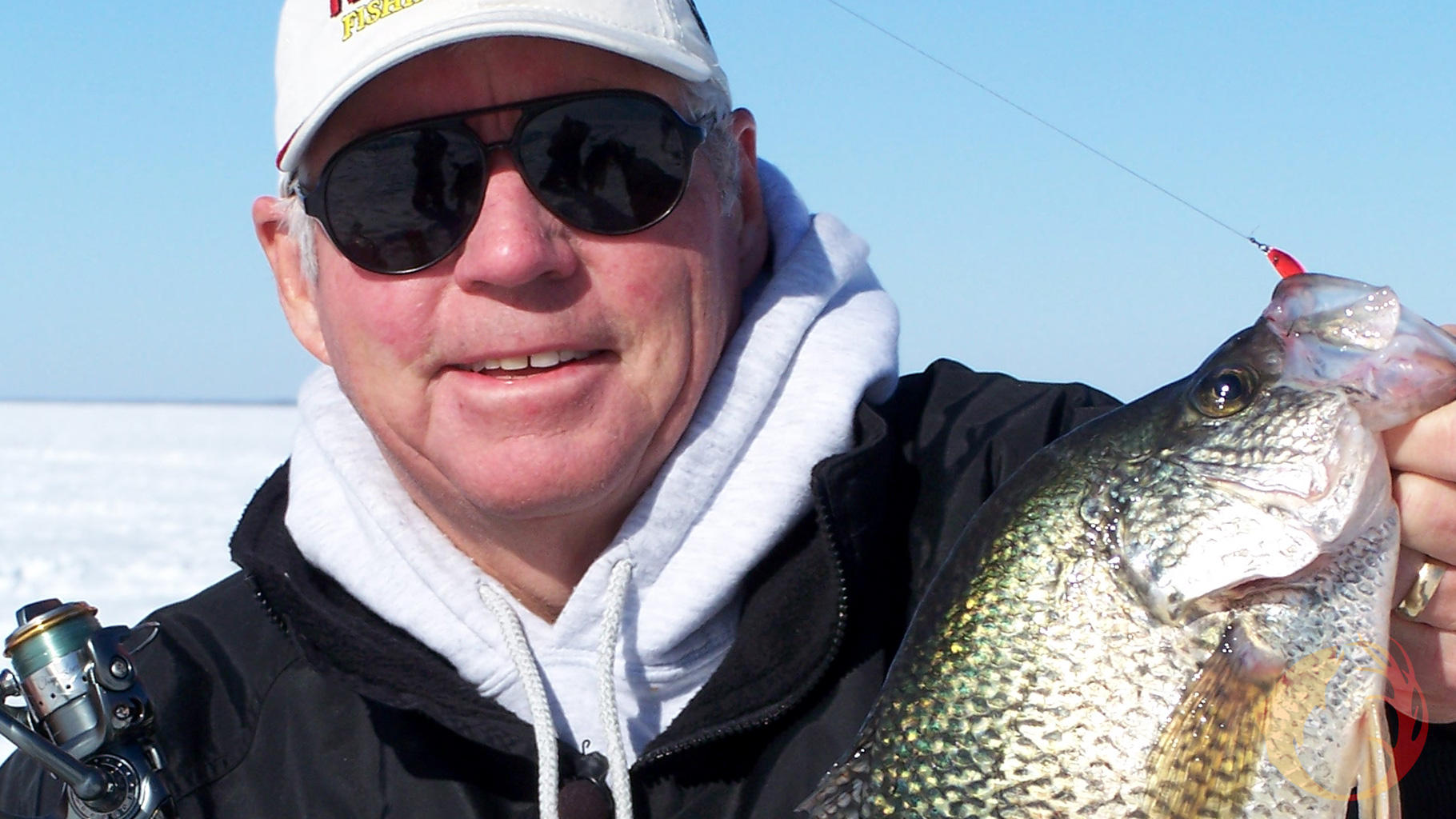 I was at an ice-fishing Open House at a retail tackle shop recently.  There were some anglers there who had been looking at a long range weather forecast.  According to this forecast, cold weather is headed to the upper Midwest, and these anglers were guessing that they would be on the ice in north Iowa by the end of November, maybe even earlier.  With that optimism in mind, now is a good time to start thinking about that first early ice fishing trip.  For many of us, that first time on the ice will be in pursuit of panfish, probably on ponds and small lakes at first, as they are typically the first to get a cover of ice. Here are some ideas for catching panfish through early ice.

Here’s a photo from a while back: Duane Peterson with a big crappie that he took on a small jig.

First thing:  Make really sure the ice is safe.  You don’t need to be the first one out there.  If there are other people on the ice, and if they’re bigger than you, the ice should be safe for you.  However, it’s not a bad idea to wear a life-jacket on early ice.  I’ve got a Cabela’s Inflatable Vest that works well:  You don’t even know you’re wearing it.  Pop plenty of test holes as you walk to your fishing area.

Start ice-fishing for panfish in areas where you caught them in the fall.  Weedbeds can be very good.

Get on your starting spot early.  Remember, we’re fishing just a short distance from the fish.  They’re straight under us, and they’re going to be spooky.  Drill a few holes, then let the area calm down a bit.  Oftentimes it will take a little while before fish in shallow water will start biting after you’ve popped some holes.

Once you’re set up, don’t move any more than you need to.  Even if you’re quiet, the fish will detect movement and get spooked again.

Panfish such as bluegills and sunfish like smaller baits because they have small mouths.

Crappies will go for bigger baits, as they have larger mouths.  If there are crappies, bluegills, and sunfish in the area, go with a smaller bait.  You’ll increase your chances of getting bit, as the crappies will eat the smaller stuff, but bluegills and sunfish often aren’t real interested in larger baits.

Small baits call for small diameter line.  In clear water where panfish can be extremely finicky, some of the most successful anglers use line of very small diameter:  Some go with 1 and 2 pound test line.  That’s light stuff, but at times that’s what it takes to put skittish fish on the ice.  I generally prefer 3 or 4 pound test.  P-Line’s Floroice is gaining favor across ice-fishing country as being very manageable, but also invisible under the water.

More and more, ice-anglers are going to plastic baits, for two reasons.  First of all, they don’t require care.

Second, they really catch fish.  The new Impulse plastics come in tiny sizes for ice-fishing and are available in a bunch of shapes and colors.

When the ice is safe but not before, keep these ideas in mind and you’ll catch more panfish through early ice.