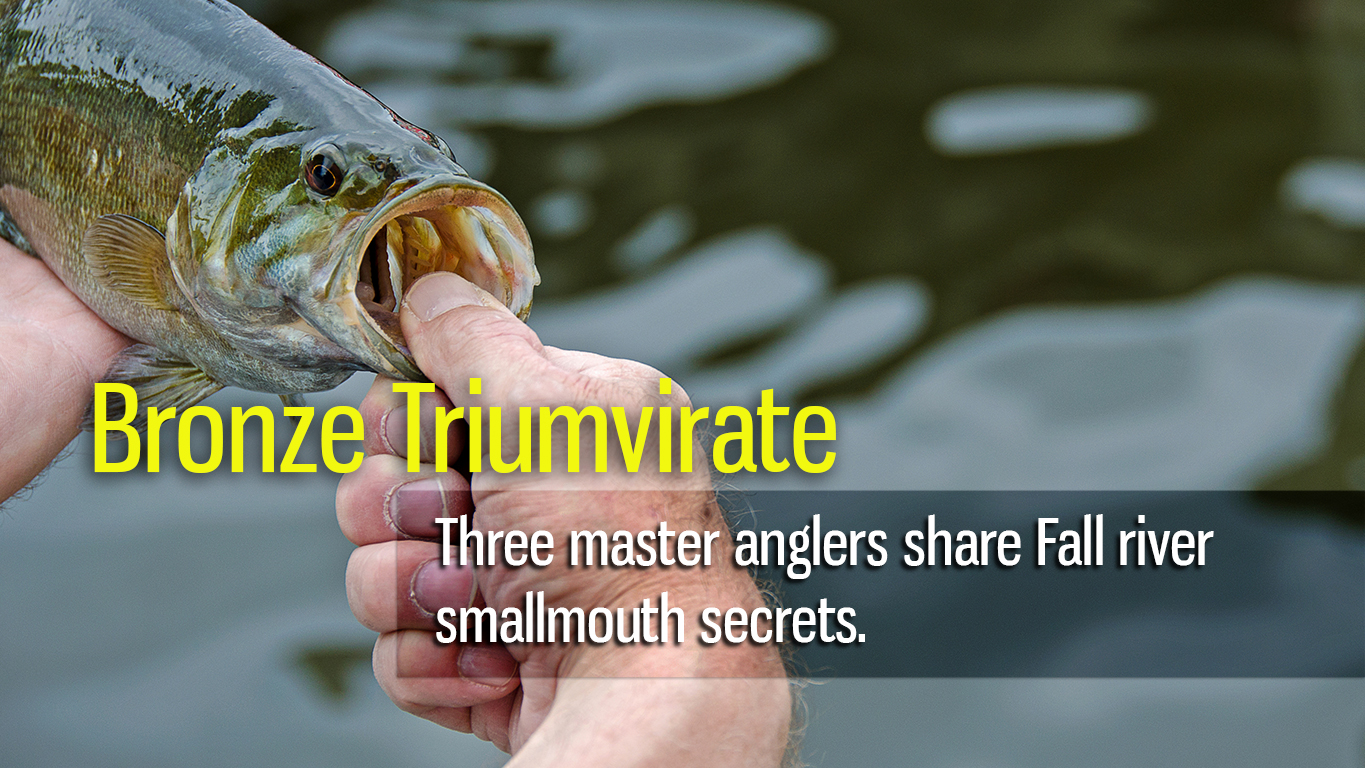 For river smallmouth bassers, “fall” carries a wonderful meaning. Across their North American range, smalljaws are on the move. Whether their riverine travels take them on lengthy journeys or short sojourns, bass respond to shorter days and cooling waters in one very important way: with great hunger and aggression.

At the epicenter of a smallmouth’s Northern range, anglers who’ve paid their dues all summer pensively await the arrival of autumn. It’s a time when day length and water temperature erode at similarly rapid rates. When leaves begin revealing their first yellows, oranges and reds, smallmouths have already packed their bags. When night time temperatures cool enough to re-open bedroom windows, the time to return to the river has arrived.

Southward to tidal rivers and a hundred streams in between, smallmouth bass answer a similar call to pull up roots and go on the chew. Biological evidence suggests that bass in warmer, southern rivers travel less in fall and often linger in shallower water. While in northern rivers that potentially freeze in winter, smallmouths often travel dozens of miles up or downstream to deep slackwater holes in bends or near confluences with feeder streams. In both cases, reduced day length triggers bass to band together into groups of a dozen to well over a hundred fish. Swim something alluring past their jaws, and they’re likely to snap. Starting south and progressing north, we reveal below three central smallmouth strategies from masters at their craft.

Winner of countless bass tournaments in California and Arizona, rising star Troy Lindner has become a student of the grandiose waterbody that is the California Delta. Comprised of nearly 1,000 miles of waterways, the Delta encompasses rivers such as the Sacramento, American and San Joaquin. While the fishery is unique, it’s far from the only tidal river system hosting smallmouth bass. There’s the Columbia River and several others along the West Coat, while the East Coast has the Delaware, James Penobscot and many more.

Lindner says that the key to finding fall smallmouths in these dynamic systems is to seek out some of the smaller sloughs and backwaters that harbor the clearest water possible. “Beginning in late September and continuing through early winter,” says Lindner, “I like to find banks blanketed with sizeable submerged trees and other woody cover. In a tidal river environment, the active bass often lie on the up-current side of cover. So if it’s an incoming tide, smallmouths position on that side of the tree. Between tides when water stops moving, bass turn tough. But once the outgoing tide commences, bass reposition on the other, current-facing side of the cover and start to bite again.”

Once he’s uncovered a potential slough with ample cover, Lindner goes right to work with one of his favorite smallmouth baits—a Rapala Skitterwalk. “The topwater calls whole schools of clear water bass out of cover. The first few casts are vital, the ones in which the bigger fish usually bum rush the bait.”After he’s taken several fish on the Skitterwalk, Lindner scales down presentation, opting for a finesse lure, such as a 4-inch TriggerX tube rigged on a VMC Tube Jig. If more fish remain in the vicinity, he’ll swim a tube to extract additional bites. “In the Delta,” he quips, “there’s always another spot to try, and always more bass to hunt. It’s a fishing paradise, that’s what I love about it.”

Equally diverse in personality are the major arteries feeding the Great Lakes. Literally dozens of rivers large and small pour into these majestic waterways—almost all of them house smallmouths. Joe Balog, who’s likely won more money in Great Lakes bass tournaments than any angler alive, often centers his autumn attention on the Detroit and St. Clair Rivers, which feed lakes Erie and St. Clair.

Balog contends that what attracts fall smallmouths into these rivers is baitfish—particularly shad and shiners—which flock to current en mass. “The smallmouth bite in the St. Clair River can be on fire from October all the way until early December,” he says.

“Best way to find fish is to move across shallow 2 to 6 foot sand flats and watch for signs of baitfish, or birds feeding on them from above. Get on the trolling motor and fan-cast and straight-retrieve a small swimbait or jerkbait, paying particular attention to subtle current breaks.” Among a host of options, Balog opts for a TriggerX Paddle Tail Minnow or a Tabu Tackle Tiny Tim, each rigged on a 3/16 to ¼-ounce VMC Half Moon Jig.

A few weeks later, he moves to the Detroit River, and continues catching big bass in 10 to 12 foot depths, discovering key current breaks with a Humminbird Side Imaging, then flinging a Rapala DT10 or DT14 to the best of them. “In most of these Great Lakes rivers, it’s all about power fishing,” notes Balog. Locate baitfish and current breaks that serve as ambush points, then determine key retrieve angles relative to these breaks. These are some of the best trophy smallmouth fisheries on the planet, and the duck hunting ain’t bad, either.”

Roach on the Mighty Mississippi

For professional guide Tony Roach, fall is equally sublime. Despite a hectic guiding schedule, he still strives to take a few days off to hit the ever-exceptional Upper Mississippi River.

“Those first several weeks in September can be exceptional,” Roach offers. “Water levels stabilize, surface temps cool down into the upper 60s and smallmouths begin migrating toward wintering habitat. They’re not using deep water yet, but position on shallow rocky runs and points on outside bends close to deeper holes. You’ll run a lot of water, casting crankbaits, but when you hit fish, it’s often the mother-lode. Fish shift position, often from day to day, but once you determine their daily locational preference, it’s nothing to boat 20 to 30 bass, with a number of fish approaching 5-pounds.”

For Roach and his local cronies, although craw colored Rapala Fat Raps excel as smalljaw search tools, he’s lately picked up a second rod rigged with a paddle tail swimbait, such as a TriggerX Paddle Tail Minnow (similar to Balog’s choice) rigged on a VMC Half Moon Jig. Retrieved slowly and deliberately, the swimbait shines for loading the boat once a crank has sleuthed out the school.

Sometimes, fishing rivers for fall smallies is so hot that presentation nearly becomes an afterthought. Particularly so when you stop to smell the roses, or rather, that delicious, slightly spicy autumn air, and realize you’re the only boat for miles, and the that smallmouths eagerly await your next cast.